It seems like just yesterday that I was having lunch over the winter holiday break with Nick Cooper – now leading Hanbury Community Design Laboratory (HCDL) in Richmond – and An Liu, a Richmond friend of Nick's and now a member of the HCDL. While in town, they made time to take me on a visit to their recently completed art installation.

With a modest grant from the Branch Museum of Architecture and Design and the tireless efforts and support of his passionate team of community members, An led the charge in creating the wonderfully captivating piece of experiential art, “Helper,” which is documented below.

An’s proposal was to create a piece, designed on the basis of ‘found’ or discarded materials. An came across 2,600 ‘spikes’ – slivers of wood trimmed from wood slats for a parking garage screen wall under construction in Richmond – otherwise destined for the dumpster. His design for the piece—prickly, aggressive, and frenetic from the outside like the quills of a porcupine, and composed, calming, and sort of settling from the inside—both employs and was inspired by the discarded materials that he came across.

It is an agile, nimble, and resourceful way to design. And an award-winning one at that! We were recently made aware that “Helper” was named to Dezeen’s 2022 longlist for Installation Design.

Many thanks to An and his passion for bringing the experience of design to all in the community. To take a deeper dive into the inspiration and intent of this immersive piece, please enjoy the project overview from An and his team included below.

For more information on this esteemed award, check out the “Helper” project page on Dezeen and join us in congratulating An Liu! 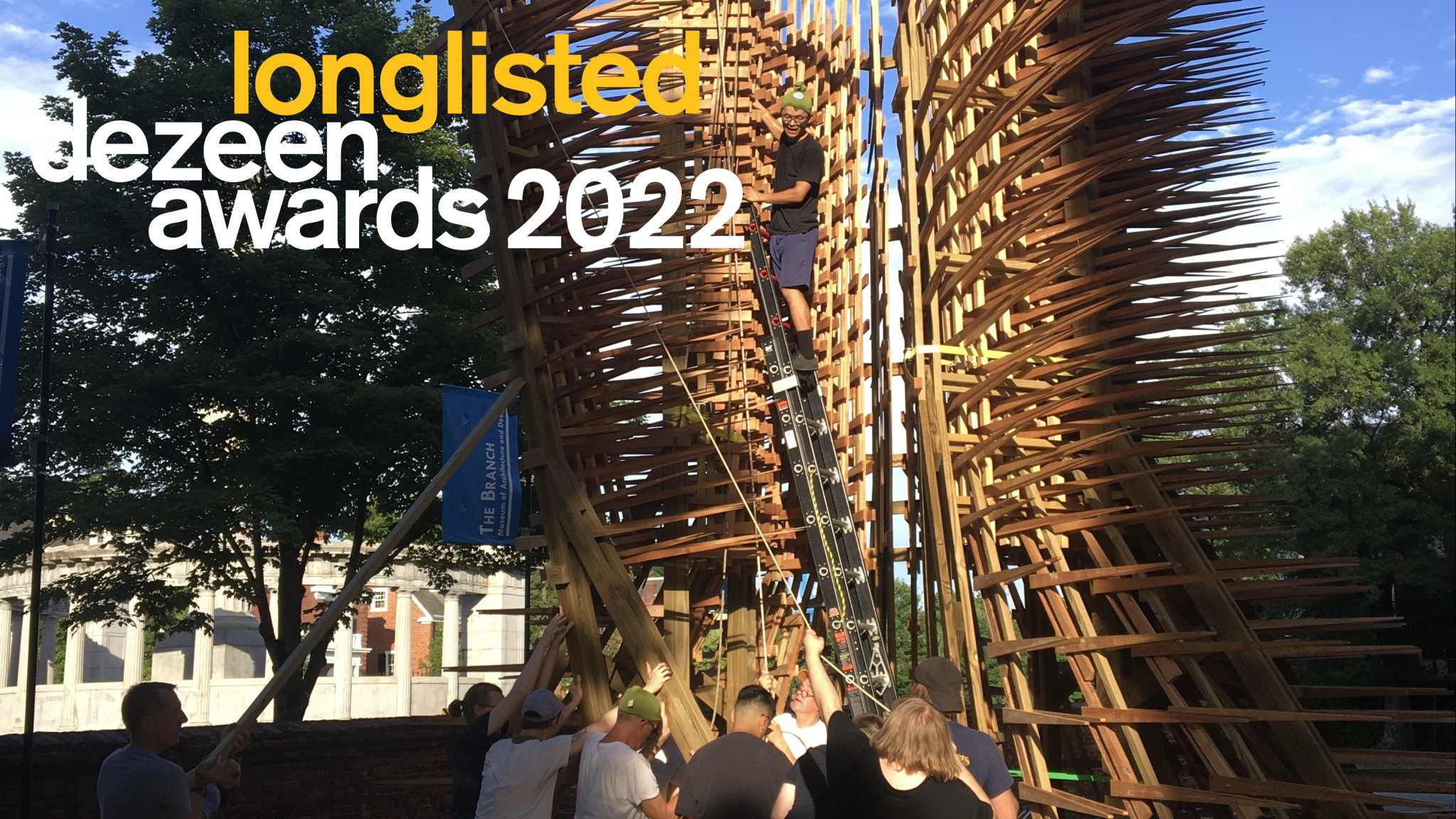 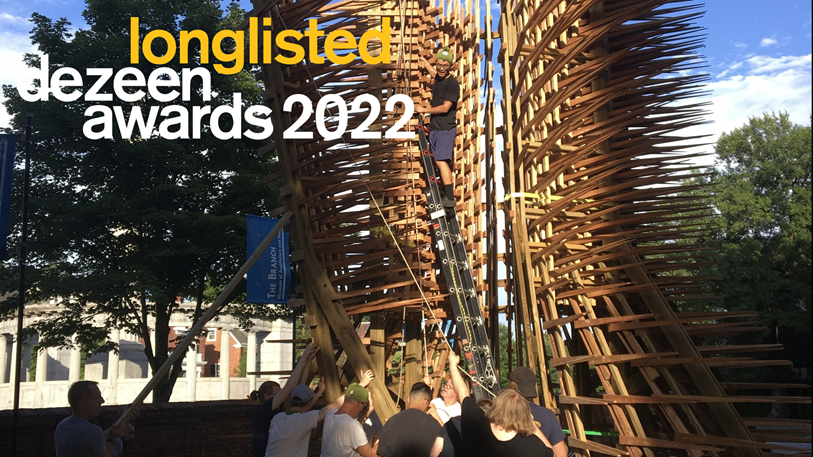 “HELPER”
Helper is an architectural installation addressing consumption and sustainability. It stands in front of a national historic building. It faces a 5.4-mile Monument Avenue which was the home of 5 monumental statues of confederate generals. The statue of the president of the Confederate States was right outside the brick fence on site. What messages that the Helper is expressing are one of the biggest drivers of the design.

The project is aiming to highlight human’s impact on the natural world acknowledging wasted materials, bringing awareness to our environment, and addressing the symbiotic relationship between humans and Earth. The material selection was one of the biggest challenges given the modest budget to work with. Besides paying attention to where the materials come from, more importantly, where they end up after the installation is also one of the main drives of the design.

“One weekend I was running past a construction site in downtown Richmond. I saw this beautiful building facade made out of red cedar boards. I knew there must be a construction dumpster somewhere for the cutoffs. I searched everywhere but I couldn’t find it. The second I was ready to give up, I saw the corner of a dumpster poke out of a concrete wall 20 yards away. That’s where I found all the pointy red cedar scraps. I ended up collecting about 2,600 spikes.”

“Once I had all the cedar collected, I took a step back from the “Helper” design I had and asked the cedar “what do you want, spike?” The spike metaphorically responded “I want to dance, I want to yell, and I want to help”. The design for the “Helper” started reviving in a way that celebrates the pointy cedar scraps instead of forcing them to adapt. Cedar spikes started dancing.”

The structure presents a dichotomy between inside and outside through sensory experiences. Externally, sharp ends of abandoned materials represent the material life cycle and human consumption. Moving into Helper, visitors physically and metaphorically change their relationship with the structure. External threats from the abandoned materials transform into armor, offering a protective shield.

The peaceful interior atmosphere awakens the senses, allowing visitors to fully experience the cedar's natural light, color, smell, and texture, and bringing awareness to the surrounding environment. The user experience from exterior to interior is paradoxical, transitioning from threatening to protective.

Community engagement is a big part of this project. Considering the involvement of volunteers, wood was selected. The lumbers used for the framework were donated by DPR construction and will be returned after the deconstruction. The scale of the structure was determined by the size of the lumber in order to minimize the amount of cutting in the construction. Helper is also a collaboration amount other professionals. Local graphic designers were invited to design Helper posters to exhibit on-site monthly. From an interior vantage point of Helper, visitors see the sticks of Helper reaching out in every direction, like hundreds of arms calling for helpers.
We are all helpers.