Evidence continues to build that the classrooms of the 21st Century will be far different from the lecture hall style of the past—and be more effective in preparing students for the workplace of tomorrow.

Active learning is any instructional method that engages students in the learning process. It is, we think, one of the most meaningful shifts underway in higher education.

As we've noted in two previous posts, active learning classrooms are specifically designed to encourage student interaction with peers, the instructor and the material. For instance, rather than a traditional lecture hall with a teacher in front facing rows of students, classrooms may have flexible seating to foster student interaction and small group work. Rather than sit in separate desks, students often sit in clusters around round tables. Teachers rove around the room to answer questions and lead group activities. You can read our previous posts here, Space: More Than Square Footage Per Student and Active Learning Impacts Design Growth in Scale-Up Classrooms. 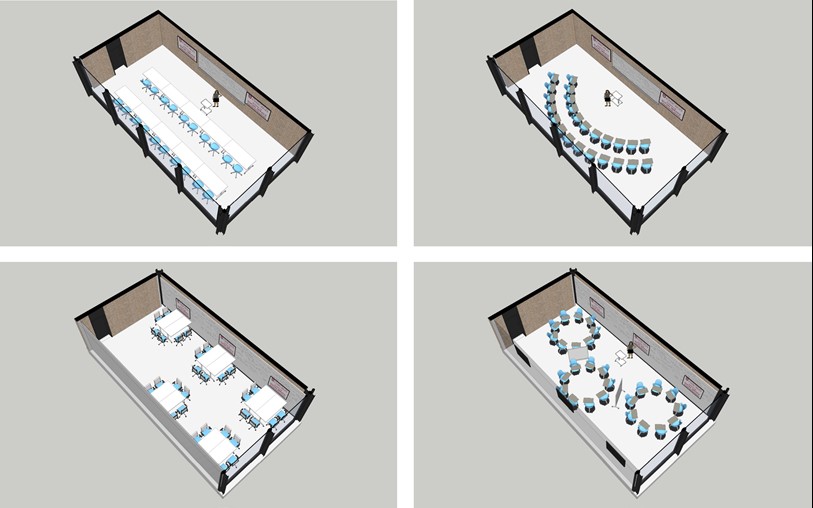 As at MSU, other schools have identified improved student performance from high-tech, active learning classrooms.

One study, published in 2014, found that undergraduate students in STEM classes with traditional lectures were 1.5 times more likely to fail than students in classes that use active learning methods. The active learning students also showed an average increase in exam scores by 6 percent.

The research sprang from a meta analysis of 225 studies that reported data on exam scores and failure rates when comparing student performance in STEM courses under traditional lectures verses active learning environments.

The University of Minnesota documented similar results in its study of student performance in active learning classrooms vs. traditional ones, noting average gains of nearly 5 percentage points in final grades.

Those are “improvements in the student academic experience that few education interventions could aspire to,” wrote researchers in an article, “It’s Not You, It’s the Room”—Are the High-Tech, Active Learning Classrooms Worth it?,” published in the Journal of College Science Teaching in 2013.

The university’s researchers followed two groups of students taking introductory biology. One class was held in a traditional classroom, the other in an active learning one. Teachers, class days, material and tests were the same. The study results also adjusted for incoming student ACT scores.

The research at the University of Minnesota builds upon earlier data collected at North Carolina State University and the Massachusetts Institute of Technology.

At both schools, “students in modified classrooms had lower failure rates and increased levels of conceptual understanding compared with students taking the course in a traditional classroom using a lecture-based approach,” the Journal of College Science Teaching article states.

MIT, for instance, built the “Technology Enabled Active Learning,” or TEAL classroom, in 2001. The classroom, rather than having chairs facing a blackboard, has 13 circular tables where students discuss questions and collaborate. The failure rate for introductory physics, normally about 10 percent, was cut in half, the school reported.

Inspiring a Love to Learn

More schools appear to be experimenting with more active learning approaches. A recent study found that 55 percent of higher education faculty are "flipping" at least some classroom time, meaning that course material is reviewed online before class meets and class time is spent on hands-on work, Campus Technology recently reported.

Whether it is an active learning classroom, or a flipped one, or a version of the two, anything that engages students in learning is a positive. The active part of the new classrooms will also more closely resemble what happens in the workplace. After all, the nature of work is different than in the past. It is more team based, collaborative, mobile, virtual and global. Employers want graduates who’re flexible, creative, collaborative and steeped in technology, teamwork and experimentation.

Classrooms can be places where students practice these skills and, hopefully, discover and retain their love for what they’re studying.

This post was written with contributions from Timothy F. Winstead, AIA, LEED AP