In his well regarded book, “What Matters in College,” author Alexander Astin maintains that connections between students have the biggest influence on student development.

As designers and architects, we consider student connections a crucial component of campus and space design. And, we look to optimize student interactions in all kinds of ways, such as open study areas, coffee corners and intersecting walkways.

That same focus on student connections is building inside classrooms, too. I’m talking about Scale-Up, or Student-Centered Active Learning Environment with Upside-down Pedagogies.

More than 250 universities and colleges now contain Scale Up classrooms, says Robert Beichner. The physics professor pioneered the Scale-Up classroom in the mid 1990s at NC State University to introduce students to physics.

Interest in Scale-Up is “exploding,” Beichner tells us, and is in use at schools worldwide, including the University of Minnesota, MIT, Virginia Tech, Old Dominion and a few middle and high schools, too.

So what is a Scale-Up classroom? The concept is not nearly as intimidating as its acronym. Beichner, a member of NC State's Academy of Outstanding Teachers, describes such classrooms as looking more like restaurants. Gone are long rows of students sitting in lecture halls with a professor at the podium.

Instead, a Scale-Up classroom has tables, round ones, the best ones are seven feet in diameter because any bigger and one has to shout to be heard. Nine students gather in small work groups at these tables, with laptops or shared workstations. White board material covers the walls, maybe even the door, to provide work and presentation space.

Rather than stand and lecture, the professor walks around and interacts with the students as they plow through problems or discussions. Students come to class having already received lecture material. Rather than sit and listen, class time is spent doing the hands-on work that really gets sticky. The professor is there to help, as are other students. Table groups contain students of varying levels of knowledge to facilitate peer instruction.

“The old way of learning, at least in the intro courses, was to dump people into lecture halls where they don’t interact with anyone. Scale-Up takes advantage of the people,” Beichner argues.

Students walk in and see that it is “not business as usual,” said Robin Wright, associate dean at the University of Minnesota in a video on the Scale-Up website at scaleup.ncsu.edu.

In 2010, the University of Minnesota completed ten active learning centers that can be divided into 20 Scale-Up rooms for 27 to 126 students. Within a year of opening, one-third of the school’s undergraduates had attended at least one class in one of the rooms, the university’s website notes. 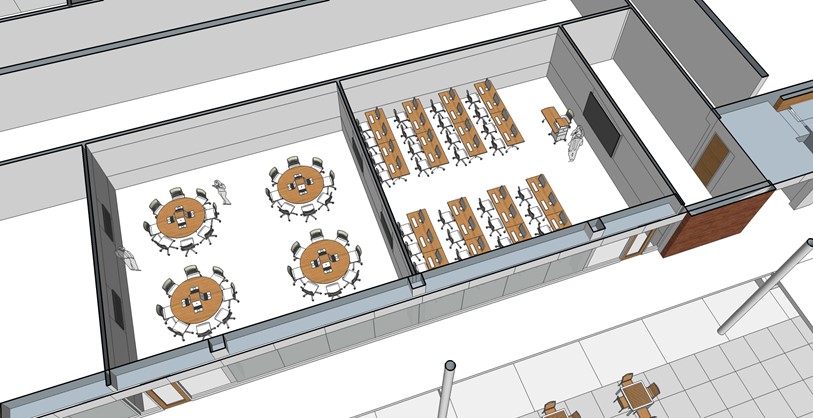 Currently our work with higher education clients is seeing Scale-Up spaces incorporated into almost every type of building on campus. Active learning happens in all types of places and curriculum; from student engagement spaces incorporated into the residence halls to the graduate programs for public policy. While Scale-Up began as a way to engage more students in STEM, with technology and the increased access to WiFi, almost every space can become a space for learning.

I had a unique opportunity to explore the design considerations of Scale-Up classrooms several years ago as part of a design studio with third-year architectural students at NC State. We dissected such things as what shape of room might work—or not. An “L” shaped room, for instance, cut down on sight lines between students. With so much white board space in a room, lighting choices became more important than ever. Just how much presentation space do fifty students need anyway?

One aspect of Scale-Up classrooms is access to technology to research and disseminate information. Yet a classroom equipped with workstations, WiFi and white boards doesn't constitute the heart of the Scale-Up classroom.

The “most important technology is the table,” Beichner reminds us. That’s the tool that brings people together in a circle so that ideas collide and connections are made that inspire students to return the next day.

Scale-Up is sometimes referred to as a “flipped” classroom and is symbolic of active learning, which advocates say fosters more and better student connections, not only to each other but also to the content.

The students “support each other” and get a sense that someone cares how they are doing, Beichner says.

For teachers, the more hands-on, rotating style of interaction gives them a better idea of what students are—and aren’t —understanding, MIT physical professor John Belcher said in the NCSU video.

Beichner estimates that one-third of today's Scale-Up classrooms are devoted to physics. Other classrooms concentrate on chemistry, math, biology and the humanities. 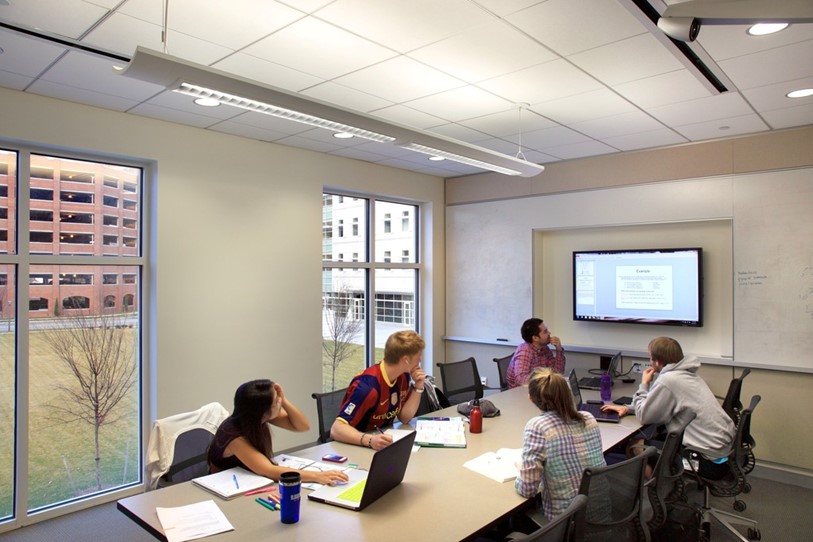 The value of Scale-Up

Scale-Up has received some high level support. Funding for Scale-Up research has come from the U.S. Department of Education as well as the National Science Foundation. What’s more, a 2012 report to President Obama endorsed “active learning” as a way to cut into an anticipated shortfall of one million graduates in STEM fields.

Like so much in education today, cost is a limiting factor when schools consider Scale-Up classrooms, Beichner says. The classrooms don't accommodate as many students as do large lecture halls. At the same time, online education is rapidly growing. Beichner suspects that economics will ultimately favor the deployment of more Scale-Up classrooms.

“Students will want to see a value added for the extra expense of attending a brick and mortar institution as compared to getting classes online,” he says.

We look forward to more development of Scale-Up classrooms and to other advances that better prepare students to meet the workplace challenges of tomorrow.

This post was written with contributions from Jamey Glueck, AIA, LEED AP BD+C