Breaking Down Barriers: Hanbury Gets To Know A Robot

A few weeks ago, this year’s Virginia Design Medalist, Jonathan Grinham, hosted a session for the Hanbury Summer Scholars on robotics. Together with his frequent collaborators, Nathan King and Martin Angst, the trio shared their insights and talents with Hanbury. Nathan, the co-director for the Center for Design Research at Virginia Tech, and Martin, a Virginia Tech graduate student and a professor for an introductory fabrication course, walked through the process of using an ABB robot to create various forms out of foam.

The process began with understanding the machine itself, as most of the Summer Scholars — and many Hanbury designers — had never worked with them before. The ABB robot operates on six degrees of freedom, much like the rotation of a human arm, unlike the usual three degrees of x, y, and z axes seen amongst other fabrication tools. This allows for a greater flexibility in the motion and calibration of the tool. Initially working in Rhino to draw two curves on a single volume, we then assigned these curves to components in a script within Grasshopper. Grasshopper works with a plug-in paired to the robot called Taco ABB, which simulates the robot digitally before sending the code to the actual robot. At the end, the script produces a code that can be transmitted to the controller.

The robot, as Nathan described it, is a tool that moves another tool. These tools move by following a series of prescribed points located in space. Collectively, they facilitate a process that enables us to create forms and shapes, to find solutions that we might not otherwise, and to help us consider things that have direct applications for innovative or purely theoretical fabrication.

As each attendee used the robot on a 4"x4"x18" block of foam, the room buzzed with creativity and emerging ideas. Personally, I imagined a potential 100 percent efficient process – creating complex, graceful forms with no material waste. Typically when making a shape, we chip away from an un-sculpted piece. Here we combine what we remove with what’s left, and the result has no waste with an almost undeniable sense of balance. Hanbury CEO David Keith was amazed by the elegance of a 2D curve becoming three-dimensional. He noted, "Seeing others do their ‘cuts’ led to new thoughts about new forms, and how to get the shape that I had in my mind.” While Hanbury Designer Jeffrey Butts was taken by the potential to “study radically complex forms and ideas – in real-time!” 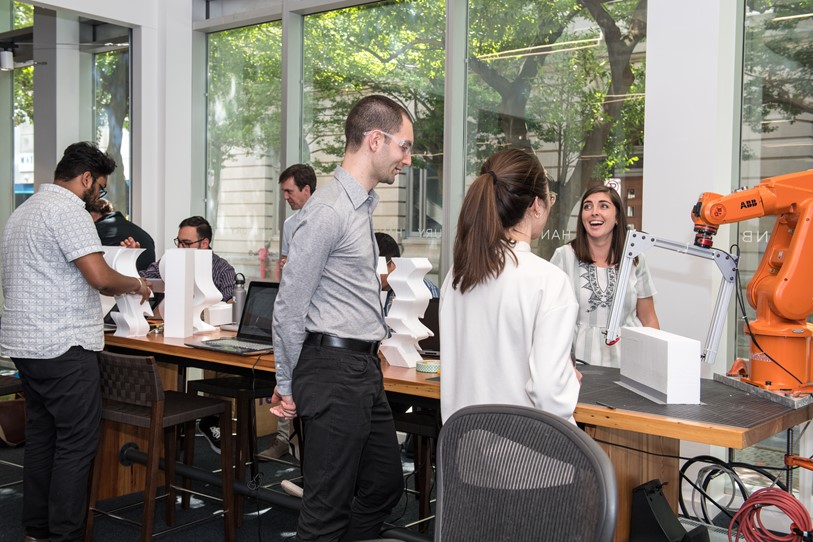 Perhaps it's only natural that this session initially conjured second thoughts. David recognized “It is freedom … to create new forms, to shape building components, and find new forms for certain materials,” but countered with “Will robots lead us to make certain forms, simply because we can?” Jeffrey acknowledged his sense of overwhelm, “It does make me ask though: how much of an architect do I want to become?’ How many hats do I need to wear? How much new technology do I want to take on? What’s it going to take to remain current, competitive?"

In an obvious generational divide, while the more seasoned professionals felt awe and intimidation at first; the younger people adapted and picked it up quickly.  Summer Scholar Ariana Arenius described her impression, “The workshop simplified the whole process of working with a robot. It made it familiar, removed the intimidation, and opened a door to take it further." She added "Rather than perceiving these tools as novelties, we're encouraged to see them as accessible tools that will only enhance our skillsets when it comes to design. By the end of the session, we all felt comfortable enough to begin exploring other ways to safely and efficiently use the robot."

In the end, everyone could envision this robot in our future design toolbox. “This is a giant leap in visualization," stated Hanbury Associate Principal Jean Webster "I can see how this kind of process could inform our approach to future shape-making.” Robot-produced products can show us capabilities of a material or a design – to create a prototype that can then be reproduced by a robot, or by hand. The prototype shows it can work and what the limits are. Jeffrey summarized the challenge many of us felt, “We need to ‘own’ the tool. We can be limited by our tools and subject to their boundaries, or we can use these tools to innovate. Can these tools be a part of solving bigger problems – like homelessness, accessibility, etcetera?”

A major takeaway from this session is the simplicity of using new technology, both in academia and the work environment. It seems there’s an amazing opportunity for schools, industry, and practice to collaborate in ways that could accelerate innovation in the built world. The school—or studio setting—provides the fully staffed ‘lab,’ industry provides technology and equipment, and the profession brings real-world programs and opportunities.

As we learn and practice this technology, the language of robotics becomes less discrete and instead widely-understood. It can streamline the design process in offices as its presence and investment grows. Whether these are used for quickly developing schematic concepts or producing a final product, the specialization of who can utilize these machines expands beyond the small percentage who work with them. In a nutshell: we spent a day playing with a robot and learned that they are friends, not enemies.

Written with input and research by Ariana Arenius